After reading a few glowing family newsletters, I am more inspired than ever to continue the tradition of the Yardley’s More Realistic Holiday Newsletter. If you ever wanted to see how we really live, this is the way to do it. And here we go!

2017 started with a bang and ended with a whimper. LUKE travels constantly for work, leaving disasters in his wake whenever he is gone. He comes home to scorpion stings, town massacres, and a nearly-blind wife. He’s leaving again in January, so please stock up on emergency essentials and hunker down until he returns and the cosmos properly realigns.

MERCEDES acquired an awesome new agent, a life-threatening scorpion sting, and acute iritis in one eye, leaving her with a blown pupil, vision difficulties, and worsening her anxiety problem. One of these things was heartily celebrated with cake.

NIKOLAI is now in high school. The best part, besides his aid Miss Marci, is that he can wear anything he wants instead of a school uniform. Because of his favorite shirt, he is now called Commander Chimposwki.

NINA cut her hair short and is constantly mistaken for a boy. In fact, only today her substitute teacher called her “he” several times until Nina said, “My name literally means girl.” The sarcasm is strong with this one. I’m so proud to call her my son.

MARSH CAT is a magical thing who loves to rub his fluffy, fluffy self against us so we break out into hives and rashes. He’s the most stable member of the family, and knows it.

RUSH THE TURTLE hates everyone and everything, except Pierce Brosnan. He’s the only one she’s come out of her log for. She flips everyone else off with all four feet.

LAS VEGAS was shot up by an insane man with unfathomable weapons. We were not injured, but were in that area not long before with our ten-year-old daughter. I saw the best and worst of humanity that night. We are #VegasStrong.

Merry Christmas and Happy Holidays! May you be well! And may you write your own, realistic holiday newsletters so we can share them. ❤

A few years ago I started the new tradition of sharing a more realistic holiday newsletter. You can read the first here and the second here. Now it’s time wrap up 2016. Hoo boy.

Hey, friends! Let’s be honest and admit 2016 sucked in almost every way possible. Somehow the Yardleys managed to soldier their way through it, because we’re not smart enough to lie down and quit after we’re knocked over. LUKE spent pretty much the entire year with allergies, an inhaler, and breathing treatments. He borrowed our daughter’s Sammy the Seal nebulizer and was simply adorable. MERCEDES won a cool haunted house but lost DAVID BOWIE. It wasn’t a fair trade and she wants her Glitter God back. NIKOLAI got into this weird Justin Beiber and Selena Gomez phase. Yes, it is too late to say you’re sorry.  NINA takes turns being delightful, turning sullen, and bursting into noisy tears. We think she’s most likely possessed by imps. LILIA is afraid to go into the bathroom because she thinks giant tarantulas live in there. We assure her that no, we only have deadly scorpions, but she refuses to quit screaming.

This year a dirty, starving, flea-bitten cat wandered upon our property and immediately claimed us as his humans. Now he’s our fat, sassy Lord of All. His true name is far too awesome and terrible to utter, so he deigns that we call him Marsh. Also, he hates you.  So bad. He’s absolutely wonderful and I’m grateful for him every day.

We hope you had a great year and that 2017 will be even better. Let’s do this thing!

These truthful newsletters are so much fun to write, and make me chuckle when I look back on the year. Please let me know if you write one. I’d love to read it!

Hooray! I baked some darling, flavorless cookies that were horribly disappointing. But look, I put them in a little jar, so now they’re charming. And look! A Christmas village! Don’t you want them now?

I’d give you the recipe but it’s a waste of flour. But hey! Sprinkles! 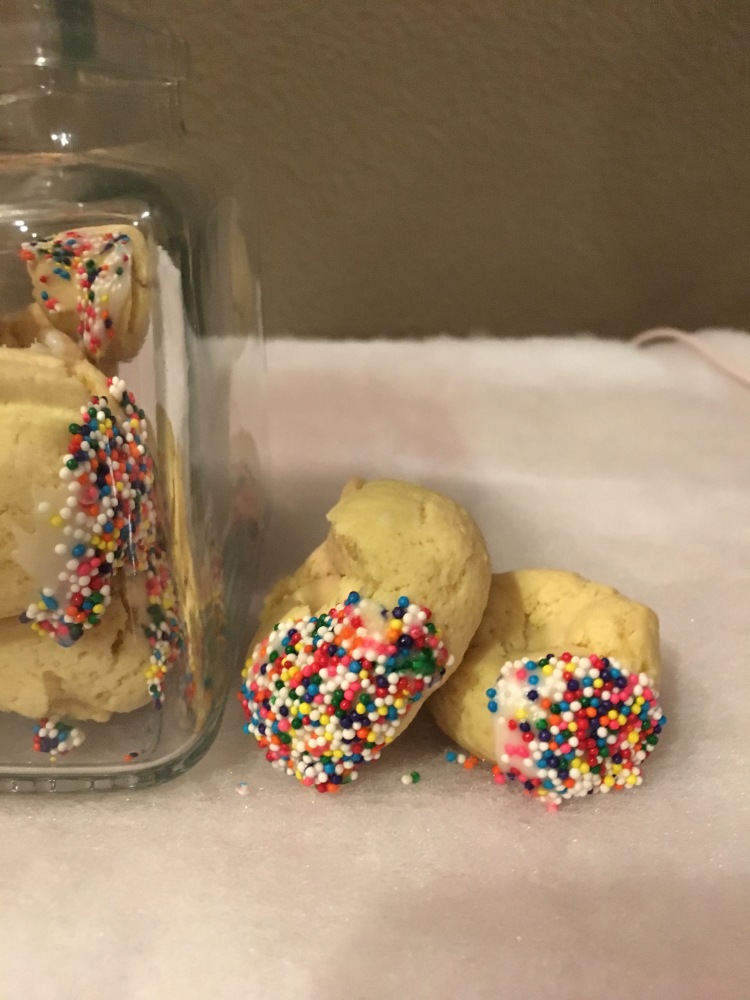 If you want the best cookie recipe in the world, go to Williams-Sonoma and try these. Only instead of straight semi-sweet chocolate chips, do 1/3 cup semi-sweet, 1/3 cup milk chocolate, and 1/3 white chocolate. You’ll thank me. They’re crack cookies.

Meanwhile, these are cute! 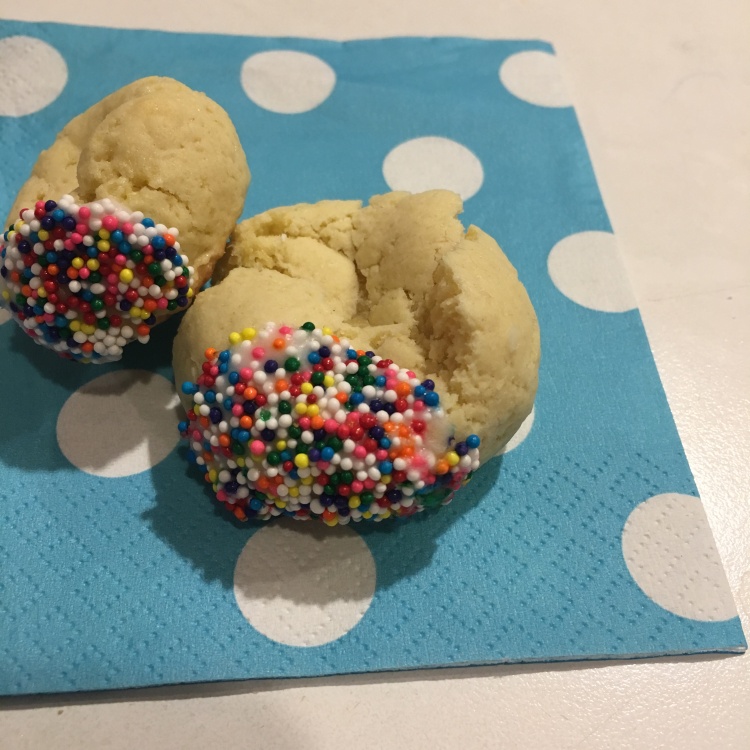 We’ve let Christmas overwhelm us. It isn’t about spirituality or kindness or even really family anymore. It’s about gifts, about running ourselves ragged, about filling our days with so much joy and merriment that it somehow turns into pressure. I’ve been trying to avoid that feeling this year, and simplifying has been a great help.

I saw this on The Merry Little Christmas Project,  and liked the idea so much that I tried it myself. Instead of stressing over what to give teachers, bus drivers, neighbors, etc, try doing something fun and simple. 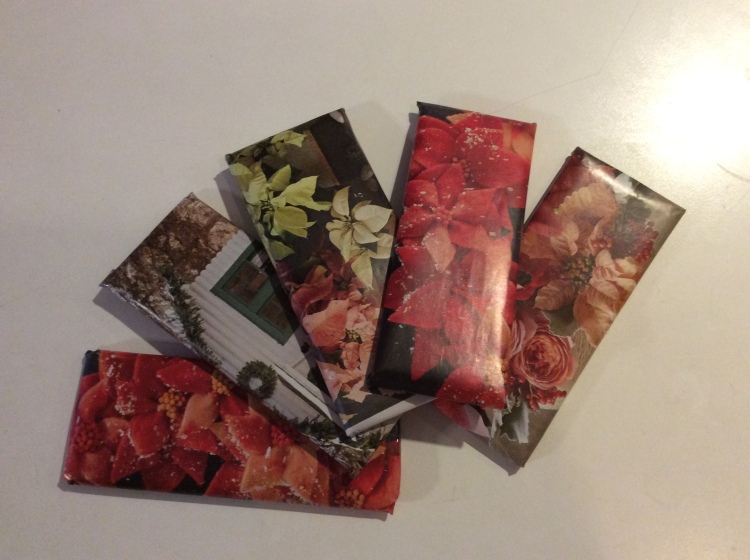 I bought a few large candy bars and wrapped them in colorful Christmas pages torn out of magazines.  The lighting isn’t great in this picture, but the gifts are glossy and full of bright colors. They only took a few minutes, didn’t overwhelm me, and are absolutely charming. It’s nice to have a quick, inexpensive gift on hand, and a handwritten note will make each one personal and heartfelt. They’re also darling stocking stuffers,

What are some of your gift ideas? I’d love to hear! 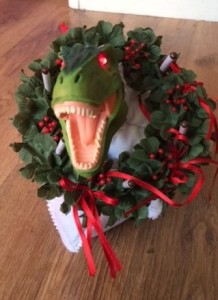 Pretty sure this will be my Christmas card this year.

It’s a family tradition we’ve had since I was a child, and I looked forward to it every year. We’d decorate the tree and have small gifts for each other.It’s something that I do with my kiddos now.

This is Christmas week! We’re putting up the tree. We’re making snowflakes and taping them to the windows. It’s time for Christmas carols, holiday movies, and everything but hot chocolate. We’ll do chocolate ice cream instead, since it is about 110 degrees here. 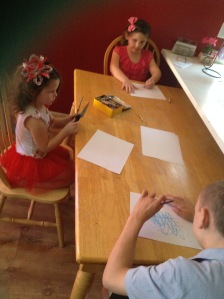 Gifts are small and handmade. Stockings are often made out of paper. It’s the simple, homespun Christmas most of us long for every December.

Won’t you join us? If not for the entire Christmas in July shebang, perhaps you can have that holiday feeling in your heart. How about being extra kind this week, or perhaps write a letter to someone you love? Peace on earth, good will to men.

Shock Totem has gone digital.  You can now buy every dark, sexy issue in a digital format.  Hooray, yahoo! But even better, you can pick up a copy of Shock Totem: Holiday Tales of the Macabre and Twisted for 99 cents.  Take a look at this beauty.  Isn’t this a stunning cover?

Also, Shock Totem has closed its doors for the holidays.  We will reopen on February 1st.  Check the guidelines and send us something then, won’t you?  Until then, may your holidays be filled with happiness and horror. 🙂

It’s all sunshine and hummingbirds.  Happy Thanksgiving, my friends!