The coolest thing happened.  Remember my short piece “Public Mourning” that was published in Robert Swartwood’s Hint Fiction anthology?  I was all atwitter about it.  I was in an anthology with Joyce Carol Oates, for crying out loud! How could things get any better?

Well, they managed to, and this is SWEET.  The Columbia Art League ( http://www.columbiaartleague.org/ ) in Missouri had a show based on stories from Hint Fiction.  “Wow!” says I.  “That’s awesome!”  But not as awesome as artist Therese Whang creating a sculpture based on my story.  Just when I thought I couldn’t love sharks anymore, Therese creates something super unique.  Thanks to Therese for creating something wonderful based on something I wrote and to Robert Swartwood for taking the pictures. 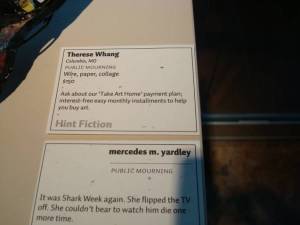 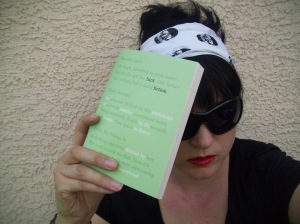 In order to keep their new romance on the down-low, Mercedes M. Yardley and Hint Fiction try to avoid the papparazzi.

Robert Swartwood, the editor of Hint Fiction, asked all of the contributors to take a picture of themselves with the book and submit it to the Hint Fiction page on Facebook.  This is mine.

Also! I’m thrilled to report that Three Guys, One Book reviewed Hint Fiction and commented on ten stories in particular.  Joyce Carol Oates was one.  Mine was another!  I am humbled and delighted to be in such prestigious company, and apparently I bring out the voyeur in people.  Won’t you stop by and read the review?

Jeremy is a Las Vegas-based husband, father, full-time employee in an industry that will remain nameless, and, to the thesis of this article, a writer.

Jeremy has written casually since the mid-90s, although he can remember making his first attempts at short stories as far back as fourth grade. He, in an effort to retain his hearing and sanity, resigned his position as singer and guitarist of a short-lived cover band  in the Spring of 2008, and focused his free time on getting some of his written works published.

Jeremy was flat-out lucky enough to have his first ever submission published: a first-person story about paranoia, murder, and grease paint called “Billy Don’t Like Clowns”, available on Amazon in the September 2008 Niteblade anthology “Lost Innocence”.

Ever since grade school, the sight, smell, and consistency of the liquid found in cans of fruit cocktail has reminded Jeremy of eye pus. Unlike mayonnaise, however, he has no problem with eating fruit cocktail.

Jeremy has continued to write short stories and prose-style poetry (poetry-style prose?), and has been published at Abandoned Towers and, most recently, New Myths. He spent several months in 2009 writing business journal-style articles for The Examiner—a fun but far from lucrative assignment.

He enjoys writing short stories, but spends 95% of his writing time working on various forms of The Novel—understanding that writing short stories, poems, and business articles is personally fulfilling but far less likely to bridge into a writing career than would a published novel (although even that seems dubious at times). After spending two years experimenting with writing styles and honing his skills with fantasy, horror, general literary, and post-apocalypse stories, he is pushing to wrap up the first draft of a 70k word thriller in December 2009, with rewrites starting in January.

In the Fall of 2010, he will have a very, very short story published in the first Hint Fiction anthology, alongside the likes of Peter Straub, Mercedes Yardley, Joyce Carol Oates, and over 100 other authors. Not that this makes Jeremy’s work better, but it does almost guarantee that at least 100 people will read his story.

Although he has no proof, Jeremy thinks that the secret ingredient in chocolate truffles is “Bolivian Marching Powder”.

Jeremy thanks Mercedes for offering the space on her blog for his nonsensical ranting, and would like to invite her readers to join him at his blog, http://gristleandsmoke.blogspot.com or his Twitter feed http://twitter.com/dontlikeclowns .

Lastly, Jeremy would like to remind you all that the three-second rule is a myth, the three-days-in-a-hot-dumpster rule is a half-truth, and the been-in-a-hobo’s-back-pocket rule is absolutely, definitely true.

To have your picture and blurb featured here, read the guidelines.  Join us!